Thanks to some great recommendations from my culinary school friends I was able to take advantage of some fantastic food while visiting Boston.  We took a break from a historical morning on the Freedom Trail to have some lunch at Carmen’s in the North Square.  We walked in to a charming little dining room with a wine bar in the front overlooking the historic Italian streets with wine bottles lining the window sill.  While reviewing the menu I noticed the waitress unveil a pasta dish a few tables down.  Through the dim light I couldn’t quite make out what it was, but it looked like she cut into something to reveal the contents of the dish and steamy aroma of deliciousness.  The historical landmarks of the morning quickly took a back seat as I was captivated by this culinary wonderment.  The dish was a baked penne with little meatballs in a roasted tomato sauce with fresh mozzarella served in parchment paper or in the culinary world we call it – papillote.  basically, the pasta if half-cooked and then placed in this little parchment paper pocket with all the other ingredients and finished off in the oven.  The packed it served to the guest and then opened at the table by the server to make for a beautiful presentation as well as release the hearty aroma of the baked pasta and tomatoes.  An aroma that I wish I could bottle up in a perfume bottle!  Between the pasta and the wine I reached my culinary euphoria for the day and enjoyed the rest of the Trail rejuvenated.  Word of caution:  If you are thinking about going there for dinner be sure to make a reservation in advance.  I managed to catch a glimpse of the waitress opening the reservation book and it was packed!! 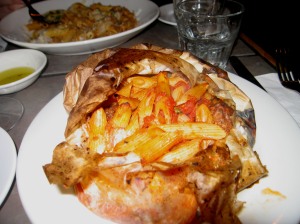 You may remember last year when I did my cannoli (My Trip to Boston) taste test and promised the next time I returned to Boston I’d have the Lobster Tail.  I never break a promise!  As a New Yorker, I’m programmed to have a high tolerance for waiting on long lines for things.  And this along with the cappucino was worth it!

My Trip to Boston

My trip to Boston to visit my friend Jake lit up my palette from breakfast meat to cannoli cream!

Mike & Patty’s is tucked away on a charming cobblestone corner in the Bay Village section of Boston.  And on a cold morning customers cram into the tiny nook and courteously share space at the one high-top table that seats six.  Service with a smile and customers conversating with the two line cooks about experimental breads and meats that would make the breakfast sandwiches even more delectable.

After much consideration I picked the north south classic-egg and cheese with collard greens and peameal bacon on an english muffin. The peameal bacon was especially interesting as it added a cornmeal texture to the meat.  The juices from the collard greens penetrated flavor through the entire sandwich, and of course gotta throw some cheese on that baby!

Jake’s bacon and egg fancy with cheddar, avocado, red onion and house mayo on toasted multigrain looked equally as delicious.  (He was not up for sharing.)

After two cups of delicious coffee and some complimentary donuts (also AMAZING) for having to eat outside, I was quite content.

Later that afternoon I set my focus on Mike’s Pastry and Modern Pastry’s dueling cannoli bakeries!  First was Mike’s.  Growing up with a Brooklyn influence I loved seeing the showcases and string hanging from the ceiling to wrap the boxes.  Reminded me of childhoo 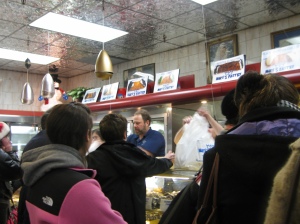 d and how the ladies behind the counter used to always give me a free rainbow cookie.  I decided to keep an even playing field and order the traditional ricotta.  After the critique we waited on what seemed to be an unusually long amount of time for Modern’s.

Both cannoli creams stood out to me as rather milky with notes of heavy cream.  Also a little on the sweeter side.  From my understanding traditional cannoli cream has neither of those ingredients.  Italian pastrys in general do not have an overwhelming amount of sugary taste.  Unfortunately I point to the Americanization of Italian delicacies on that one.  The shells were also a bit of a disappointment.  I remember comparing one to that of a fried wonton noodle. 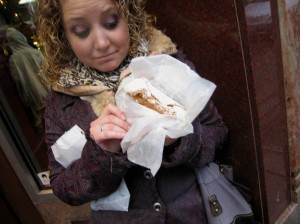 But alas!  I enjoyed both and it was a real treat to have the chance to taste different interpretations of a classic.